Brake failure, partial loss of vacuum
A side crankcase door
End cover B side issue.

On June 25th a Congleton - Oxford mystery excursion was worked round trip by 25266.

The evening Huddersfield - Wakefield parcels was worked by 25266 on November 26th, this was diagrammed for a Healey Mills Class 40. 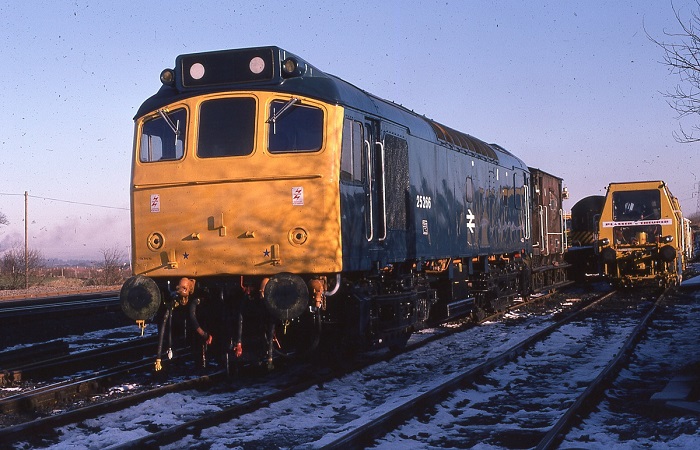 Photograph courtesy Jim Binnie, collection of webmaster.
An ex-works 25266 catches the winter's sun on January 17th 1979, having been recently outshopped from Glasgow Works. This view is at the permanent way sidings at Upper Greenhill Junction. Its interesting to note that Glasgow Works carried out major repairs to a locomotive not allocated to a Scottish depot.

1981
Although the West Country was now without an allocation of Class 25s they were still frequent visitors, 25266 & 25318 were noted on January 29th in charge of the loaded Ellesmere Port – Riverside tar tanks and the afternoon return empties. Two days earlier (27th) 25266 was in charge of a nuclear flask train from Whitemoor to Parkeston.

Originating from Heysham were a series of ‘out of gauge’ loads - concrete beams destined for the Tyne & Wear Metro, 25266 handled the second shipment on October 20th. 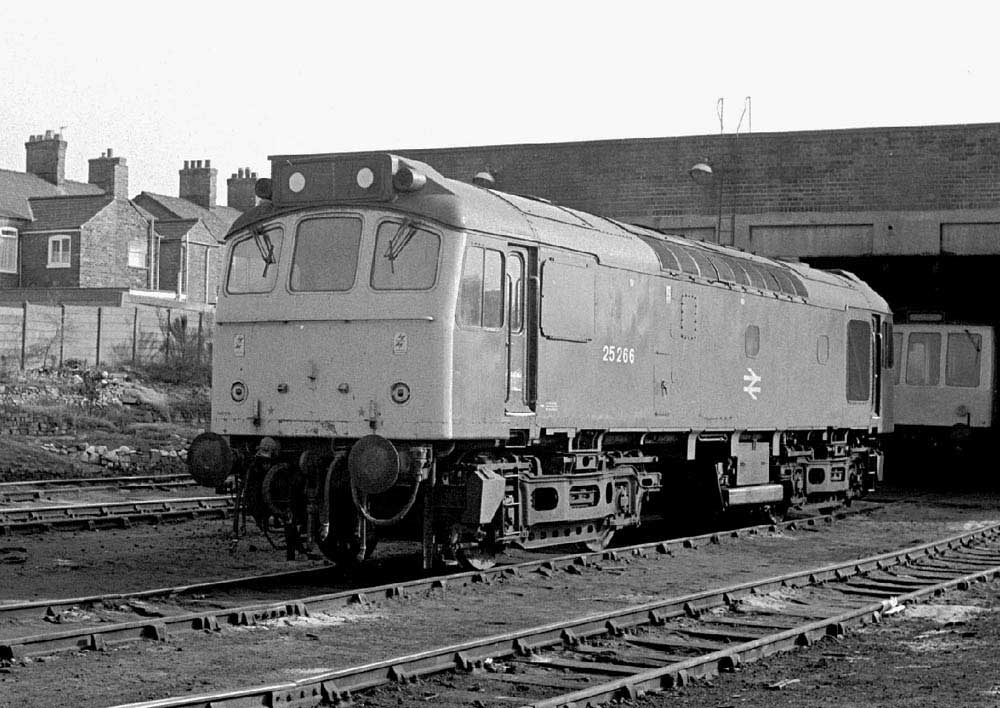 Photograph courtesy Tony Sayer.
Its April 24th 1982 and 25266 strikes a fine pose outside the old steam shed at Northwich. When new 25266 was one of thirteen Class 25s delivered new to Eastfield, the only time Scottish depots received brand new Class 25s.

25266 was noted at Newcastle station on October 4th. 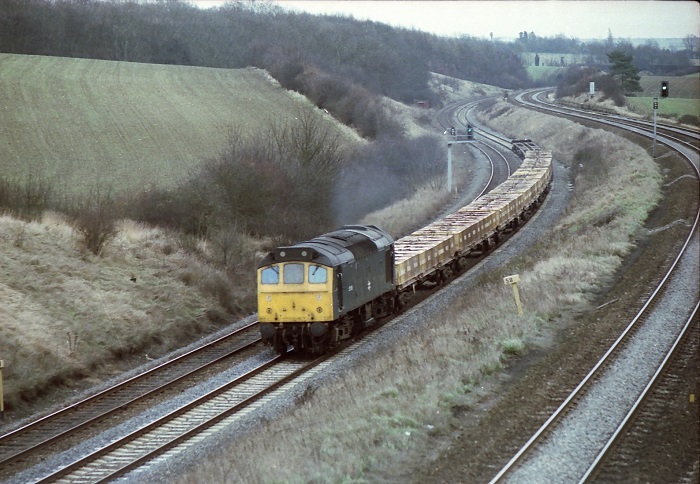 Photograph courtesy Tony Ewer.
25266 slogs up through Sharnbrook with the down loaded "Fletliner" from Forders to Garston on January 21st 1983.

A down Freightliner was noted at Coventry coming off the Leamington Spa branch on March 7th hauled by 25266.

25266 was noted eastbound through Manchester Victoria with an engineers train on April 3rd.

On June 5th 25266 was receiving attention at Toton depot.

Engineering work on July 31st saw 25266 (25198 had failed earlier) assist two electric services between Bletchley & Rugby due to the power being off.

25266 was noted southbound through Wellinborough with a ballast train on September 2nd.

On May 11th 25266 was stabled at Wolverhampton station and on this day had rescued 86247 on a WCML service which had failed at Bescot Yard, taking the service to Wolverhampton.

25266 was noted passing through Crewe station northbound on September 5th with a train of hoppers. On September 20th a relief 13.50 Birmingham New Street - Edinburgh was worked forward from Carstairs by 25266 (& 25199?). 25266 was stabled at Springs Branch on September 29th. 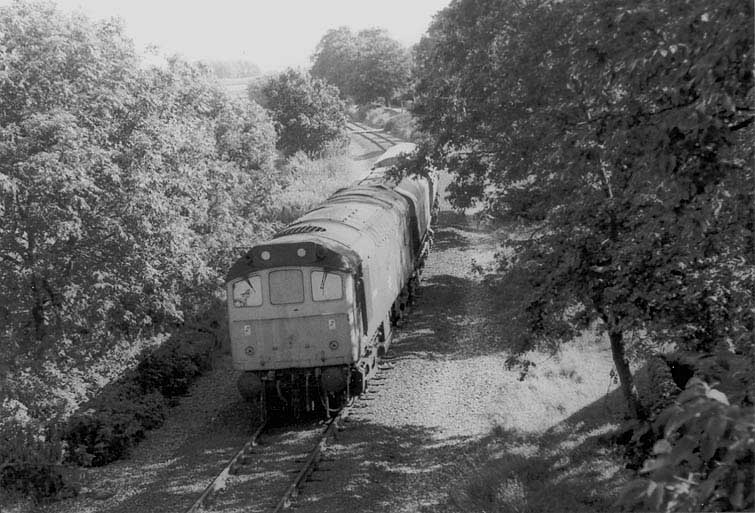 Photograph courtesy Mike MacDonald.
25266 on the Hindlow branch on September 6th 1985. Later in the day 25266 would be noted heading north at Doves Holes. 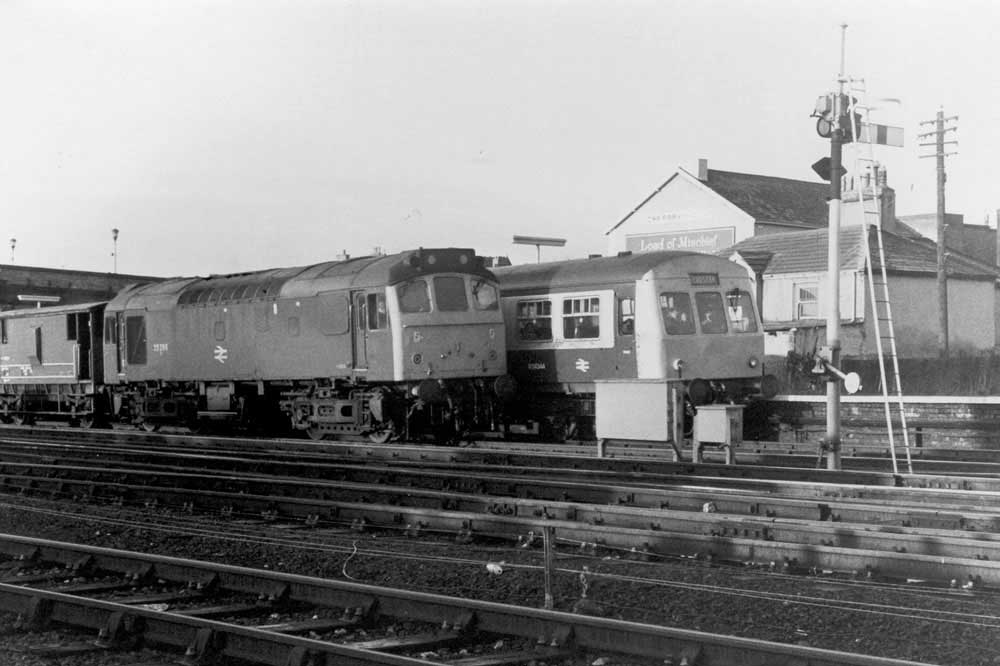 Photograph courtesy John Powell.
25266 & 54344 at Rhyl on December 18th 1985. 25266 ended its active service at Carlisle, it was eventually moved south to Vic Berry's, Leicester, but would linger here until broken up during January 1989.

25266 was noted stabled at Buxton depot on a damp December 22nd. 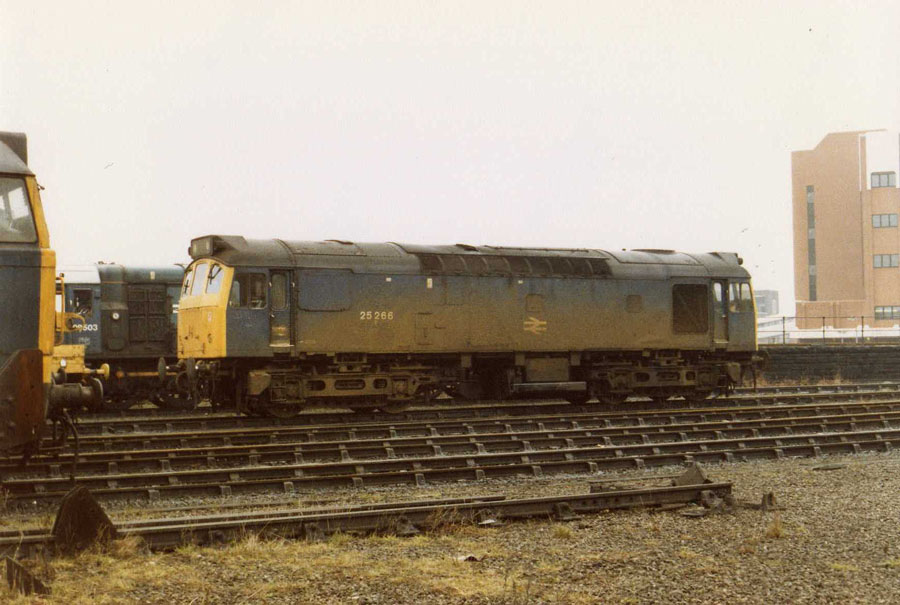 Photograph courtesy Michael Kaye.
A very work-stained 25266 at Holbeck on April 14th 1986. 25266 has another five months left in service, but for Holbeck Depot this is it's last day as an active depot.

25266 was noted light engine at Carlisle station on June 6th. On June 29th a special from Caersws to Edinburgh, the Cambrian Railways Society 'Edinburgh Flyer' utilised 25266 & 25313 on the Caersws - Chester & return legs, 25313 would fail (on the return leg presumably?). The next day (30th) 25266 assisted a failed four car Swansea - Shrewsbury diesel multiple unit from at least Llanwrtyd Wells to Shrewsbury.

On July 1st 25266 was noted light engine at Wellington (Telford).

Distinguishing Features
No.1 cab front: center lampbracket fitting but other fittings absent: (present September 1983 & September 1985) July 1986 (may need more research?).
No.1 cab front: driver's side below handrail, a couple of pieces of missing paint and paint missing from below center window: at least April 1983 until withdrawn.
No.2 cab front: to left of center lampbracket missing paint: (not present August 1983) at least June 1985 until withdrawn.