The above listing is gracefully provided by John Middleton following a visit during April 2008. There are eighteen locomotives listed but FCAB 453 is identified only by a number of parts partially buried at the north end of the yard. 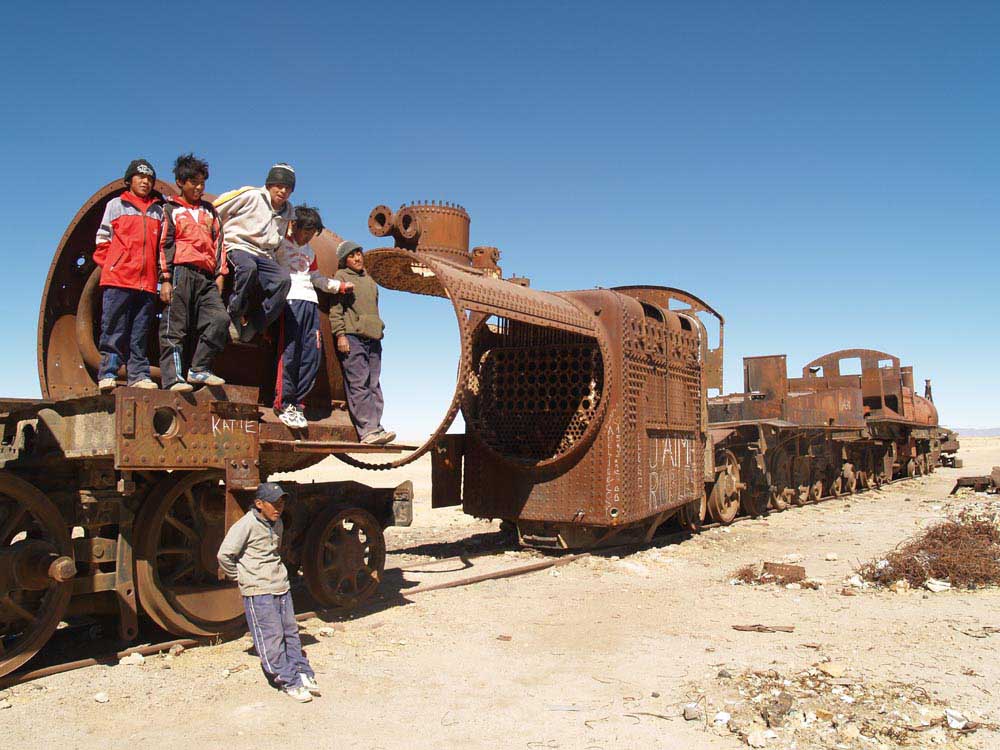 Photograph courtesy Michael Ernst.
Old & New in the scrapyard at Uyuni. Despite the gloriousy sunny weather and clear skies the attire of the local boys suggests the temperature is on the cool side. If nothing else the view provides an insight into the construction of a steam locomotive. 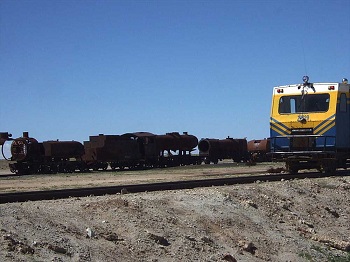 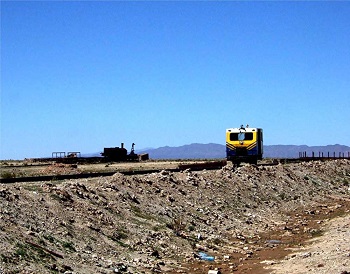 Photographs couurtesy 'Stan'
Two views taken alongside the Uyuni - Chile line with the scrapyard in the background as a four wheel maintenance of way 'speeder' No. Z529 passes by. 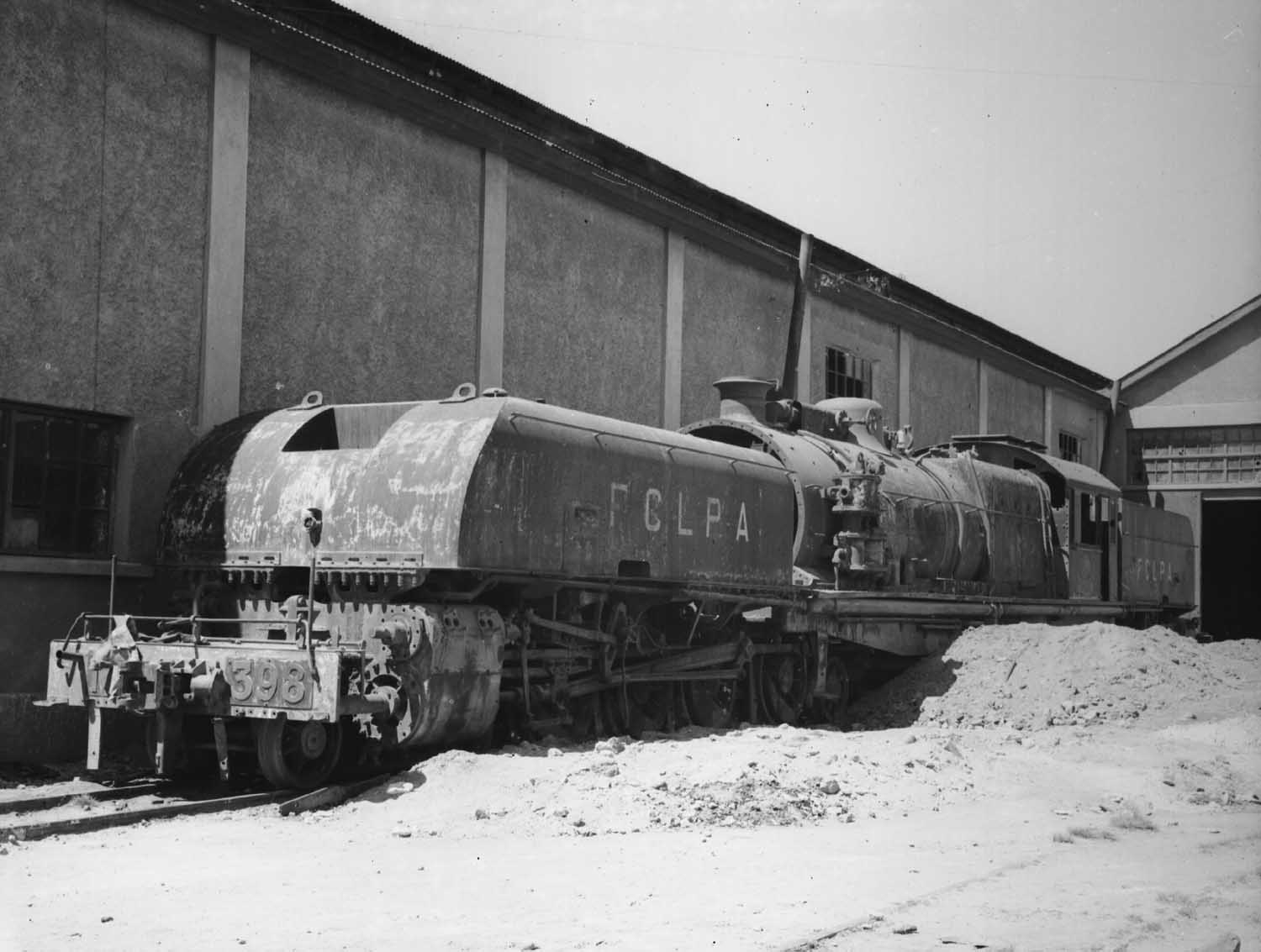 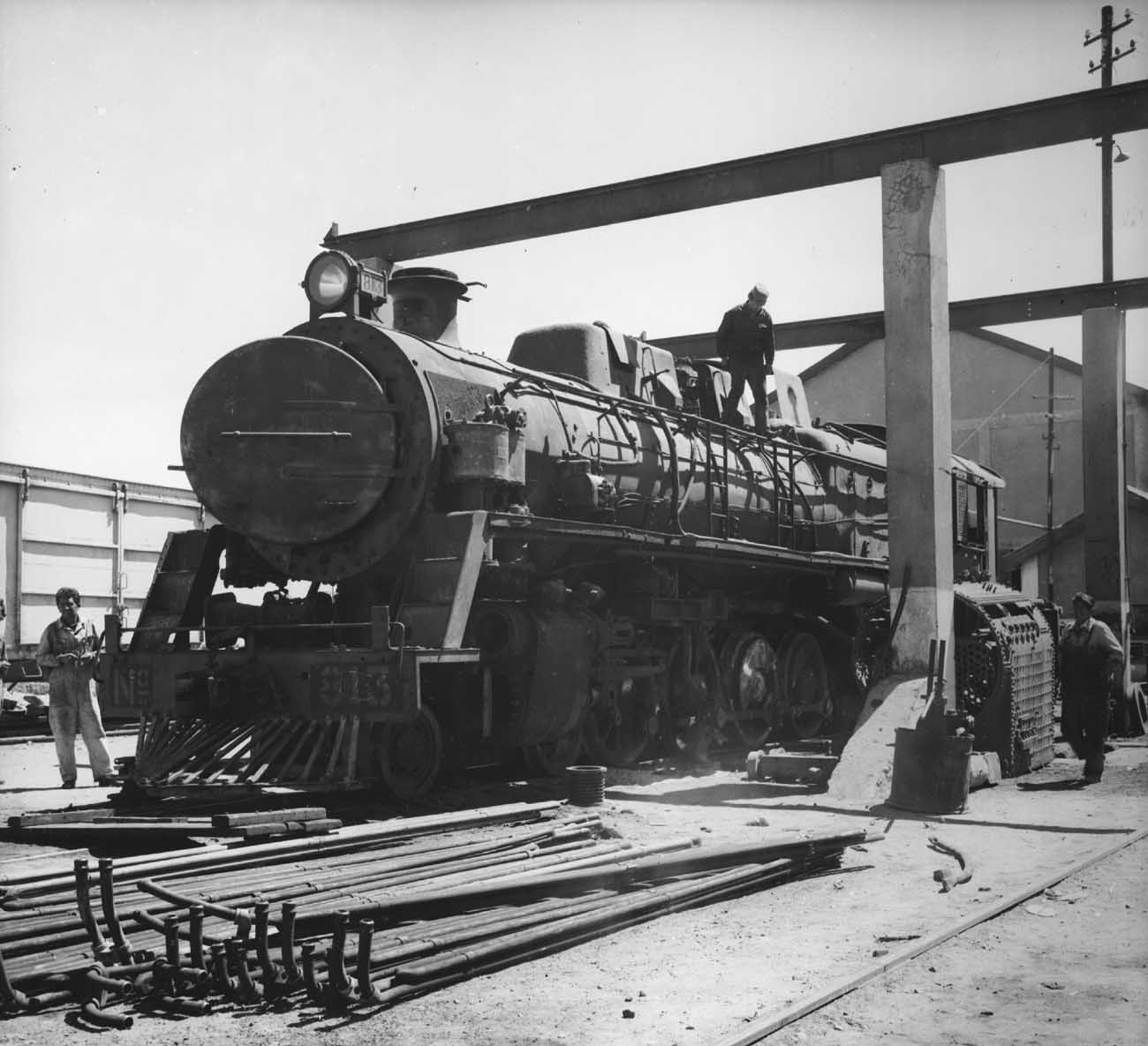 If Uyuni is perhaps the most visible of the resting places for portions of Bolivia's steam locomotive fleet, one doesn't have to travel too far to find other examples, although one must be cautioned that the accessibility of many of these locomotives is very limited.

Sucre is the home of the El Tejar workshops which are used to house the modern railbuses that work the Sucre - Potosi service. However the vast majority of the locomotives and other rolling stock found in the two workshops have not turned a wheel in many, many years. 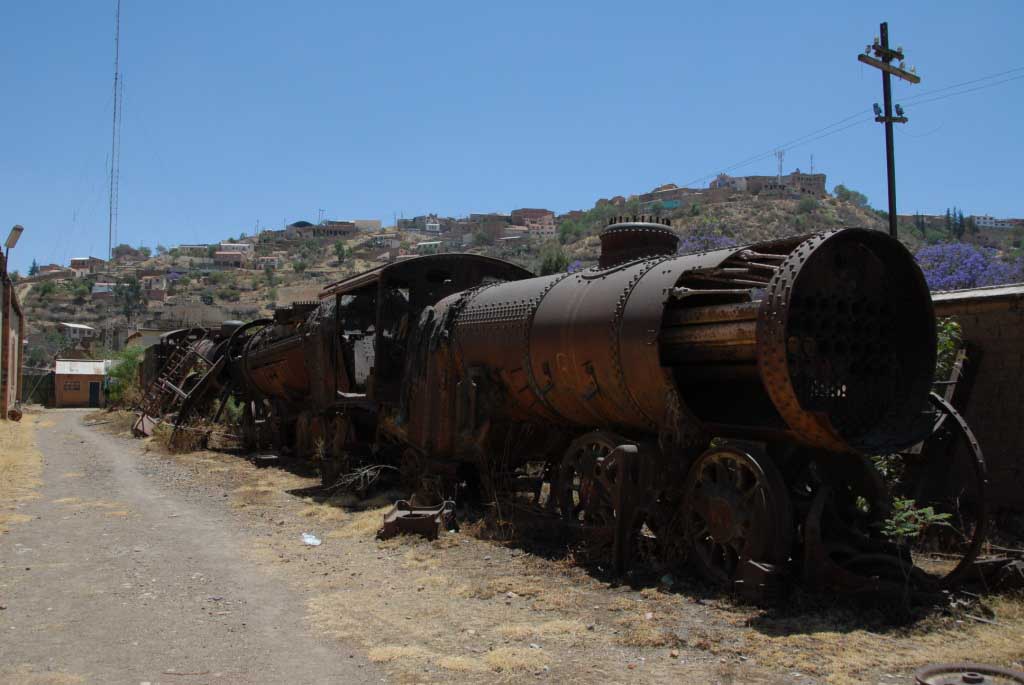 Photograph courtesy John Middleton.
A line-up of locomotives in the Works yard on October 4th 2009. Identified are the remains of FCPS 2, FCVA 5 & FCPS 3. 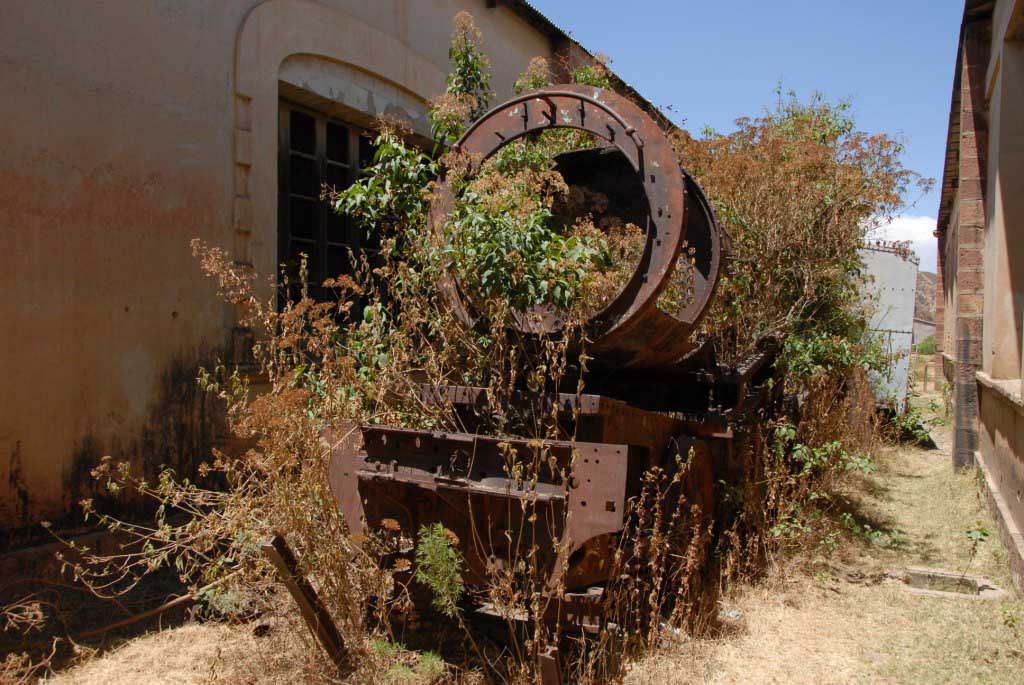 Photograph courtesy John Middleton.
FCPS Mallet No.4 on October 4th 2009. Parts of sister locomotive No.3 could be found elsewhere in the shrubbery growing in the Works yard. 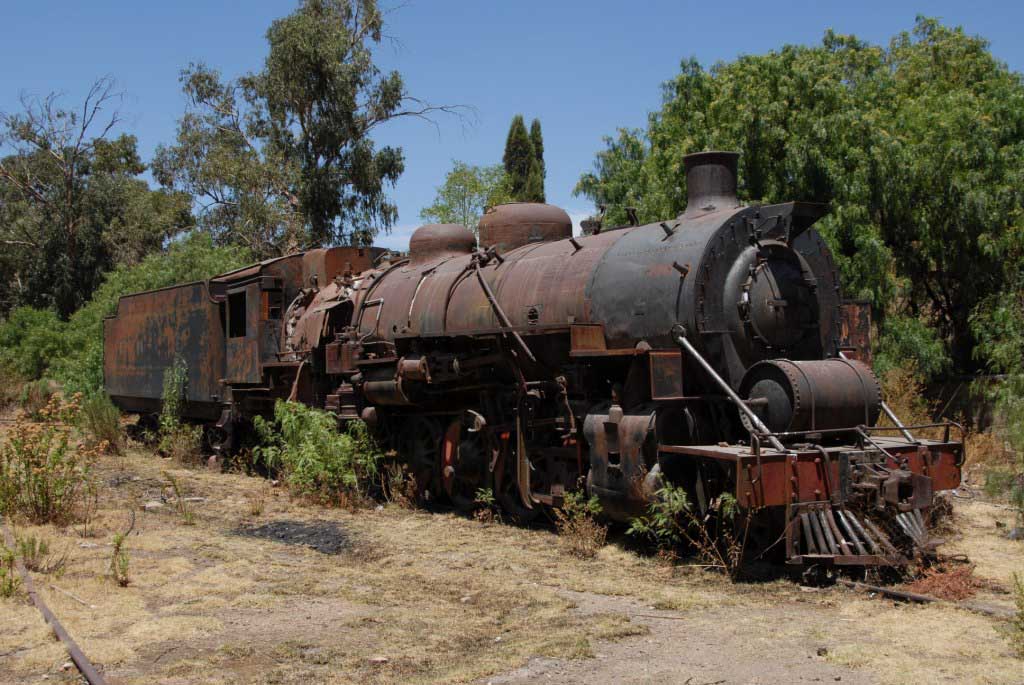 Also present are the remains of the two ex Nordhausen-Wernigerode Mallets. Incredibly it appears that together with Alco 655 at Potosi, the entire known roster of the FC Potosi-Sucre-Tarabuco survives.

Additional Details:
FCPS 5, FCPS 3 (1st), FCPS 6, ENFE 669 – Behind workshop in a line, completely overgrown by undergrowth and small trees;
• 669 – Boiler, cab and cylinder block only, frame mostly cut away. Tender on other side of yard. 669 on cabside and smokebox.
• FCPS 6 frame, wheels, boiler, cab and tender lettered “FCPS 6”, tender identical to that on FCPS 6 photo in “ Railways of Bolivia”
• (FCPS 3) (1st) – assumed - dismantled – the two frame units lying next to each other, firebox only remains of boiler, no cylinders but wheels intact, one side tank lying in undergrowth. Carries no identification.
• (FCPS 5) – assumed – boiler (same as FCPS 6) and part of frame plus cylinder block of small US design loco, some wheels lying alongside. Carries no identification.

FCPS 4 (1st) – lying in undergrowth between the main workshop and the railcar workshop, behind a wagon and easily missed. Both frame units, wheels and part of smokebox survive, no cylinders. Some brass parts stamped 4.

652 – Inside Workshop, complete. This loco has been rebuilt with its running plate raised by about 18” and the smokebox side valances removed which completely changes its appearance compared with shots in “Railways of Bolivia”. BBP 11771/1929 which means either the boiler was swopped with 651 (at Oruro with BBP 11772/1929) or the accepted ENFE re-numbering from FCCSC 1-2 to ENFE 651-652 is transposed. 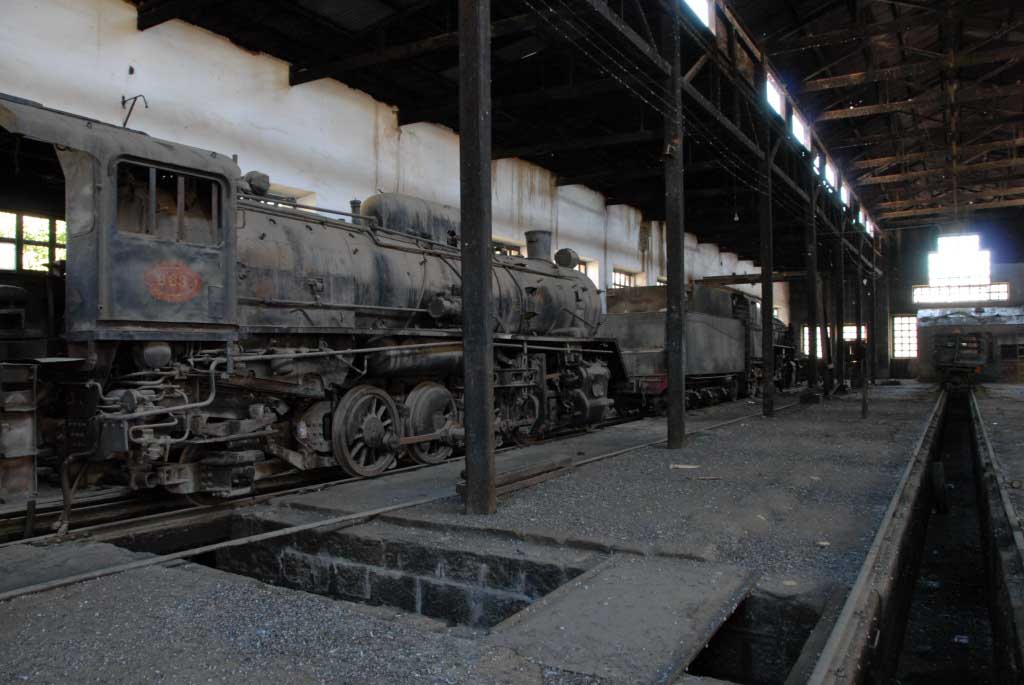 Photograph courtesy John Middleton.
Two complete locomotives inside one of the buildings on October 4th 2009. The locomotives are No. 652 & 663.

Railcars:
The working railcars, and the derelict Dodge rail lorry conversion were found in the main workshop. The remainder were housed in the old railcar workshop. The collection included many of the original FCPS 1930’s railcars built by Wayne, Indiana, photos of which appear in “Railways of Bolivia”. Renumbering from FCPS numbers (which included 11 and 14) to ENFE is unknown. One still carried a Wayne worksplate.

One of the unidentifiable Wayne 1930’s railbuses has severe wreck (rollover) damage, another may be 260 a photo of which appears at Sucre on page 121 of “Railways of Bolivia”. Note there are two “261’s” in the shed. 215 and 217 are conversions of 1930’s US built cars. In the yard was an old road bus body painted yellow (no numbers) which looked as if it may have been undergoing (abandoned) conversion to rail use. 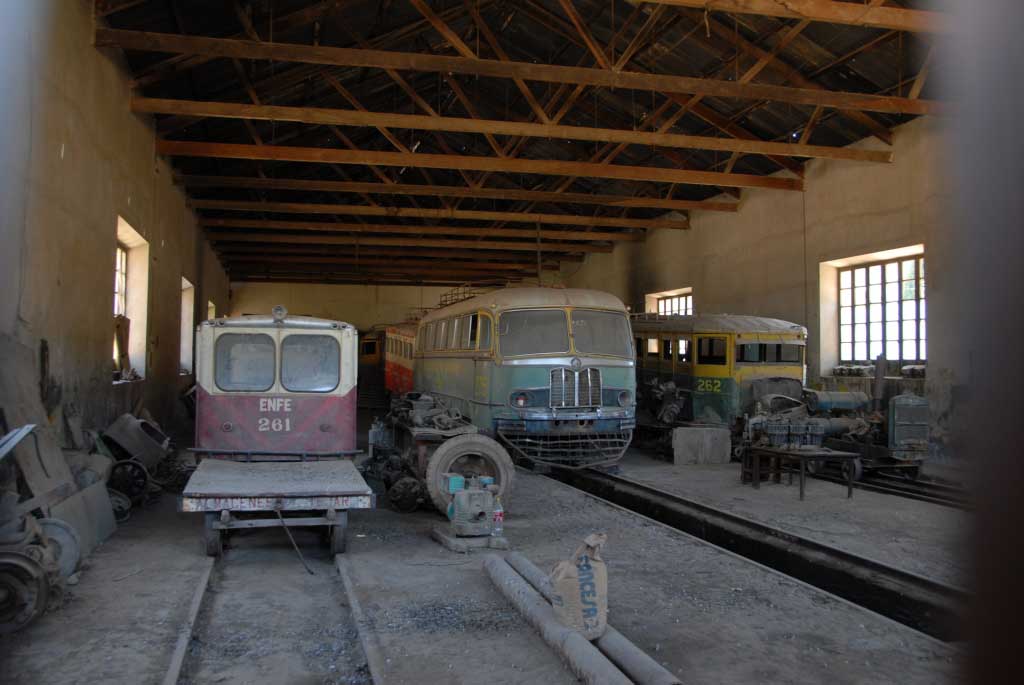 Southwest of Sucre lies the city of Potosi, which as mentioned elsewhere is connected to Sucre by a railbus service. The shed at Potosi frequently houses diesel locomotive and inspection vehicles. Three steam locomotives are present outside the two road shed. 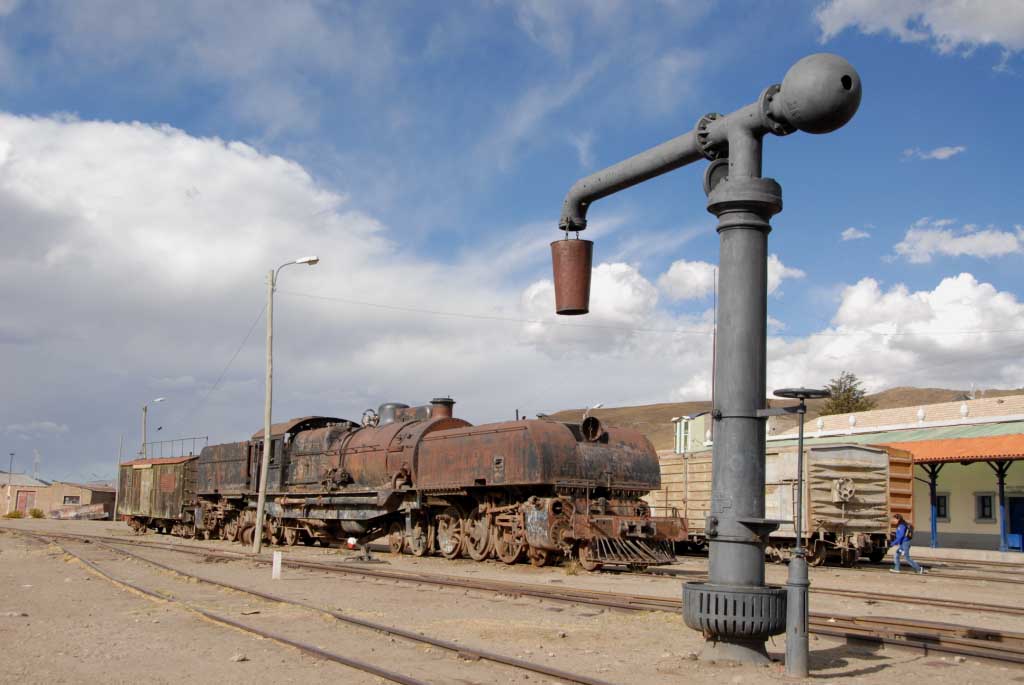 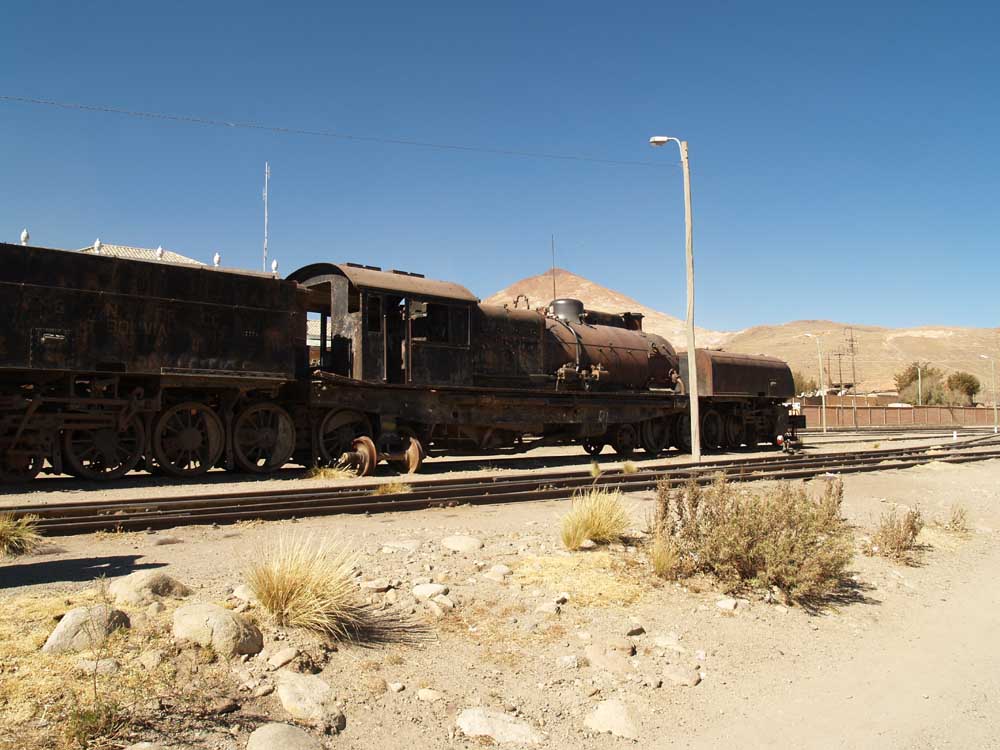 Photograph courtesy Michael Edwards.
Another view of the Beyer Peacock locomotive, with the background featuring typical scenery for the area. It was from mines driven into hillsides like these that incredible amounts of wealth were generated from the mining of silver & tin. 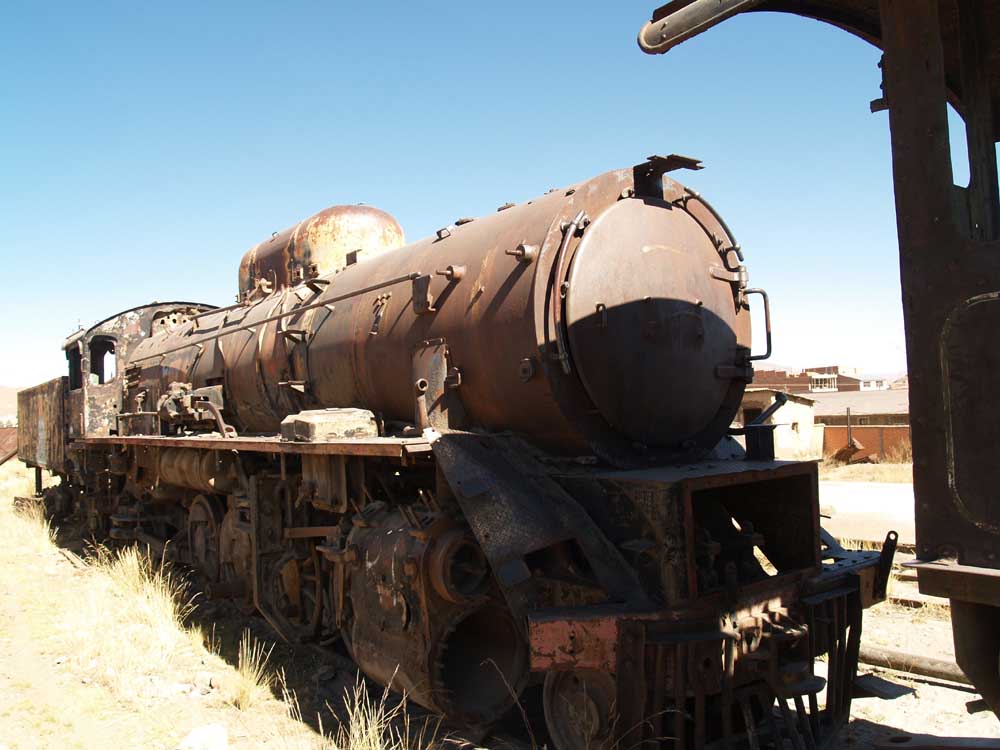 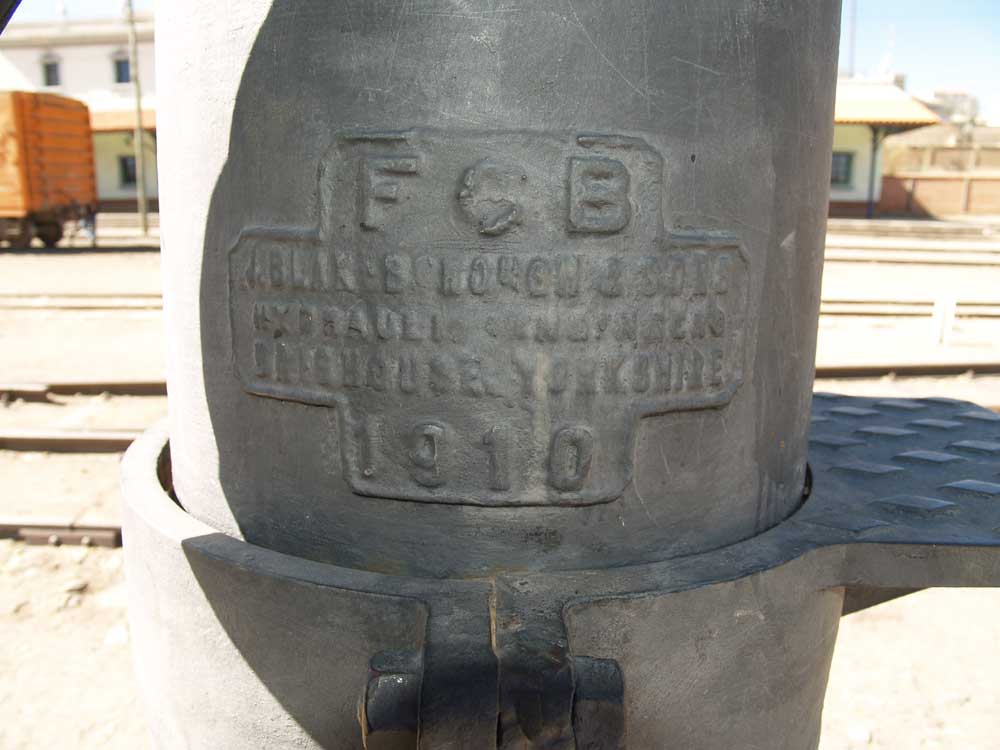 If the pictures above portray a country which was reached somewhat by the salesman of the Victorian era Industrial Revolution manufacturers it should not be forgotten that three centuries earlier the plundered wealth of Bolivia helped support the Spanish empire and other European nations feeding off the Spanish galleons returning to Spain with their holds loaded with Bolivian silver.

Much of this wealth came from the region of Potosi and in particular the Cerro Rico (silver mountain) which towers over Potosi and can just be seen in one of the photographs above. The silver mines started to play out during the mid 19th Century, but mining continues today with tin now being the primary ore mined, silver, lead, zinc and copper are also extracted in smaller quantities from the mines and the tailings.

The largest mine still worked in the area is the Empresa Minero Metallugica Potosi SA (EMMPSA); Pailaviri Mine. The mine uses a 500 mm gauge overhead electrified line running from a sub-vertical shaft underground out to a tipping point. Ore is now taken away by road to another mill but there is a large derelict mill and a derelict aerial cableway adjacent which were closed over 30 years ago. The mine has 12 levels going down some 700 metres, accessed via the sub-vertical shaft which likely use battery locos.

(a) No identification but with Siemens characteristics, possibly from batch of 6-ton locos SSW 6317-6325 of 1971 delivered to COMIBOL
(b) Low profile Goodmans of about 6 tons
(c) Older Goodman, also of about 6 tons, type 232K motor
(d) Loco appears on mine calenders looking new, but not in use, about 6 ton
(e) Shorter frame Goodman typical of 1/2M75 type (5-ton)
(f) Large loco of about 10 tons, probably European manufacture
(g) dumped upside down in yard, probably 3-4 ton size
(h) small loco of about 2-ton size, unknown manufacture 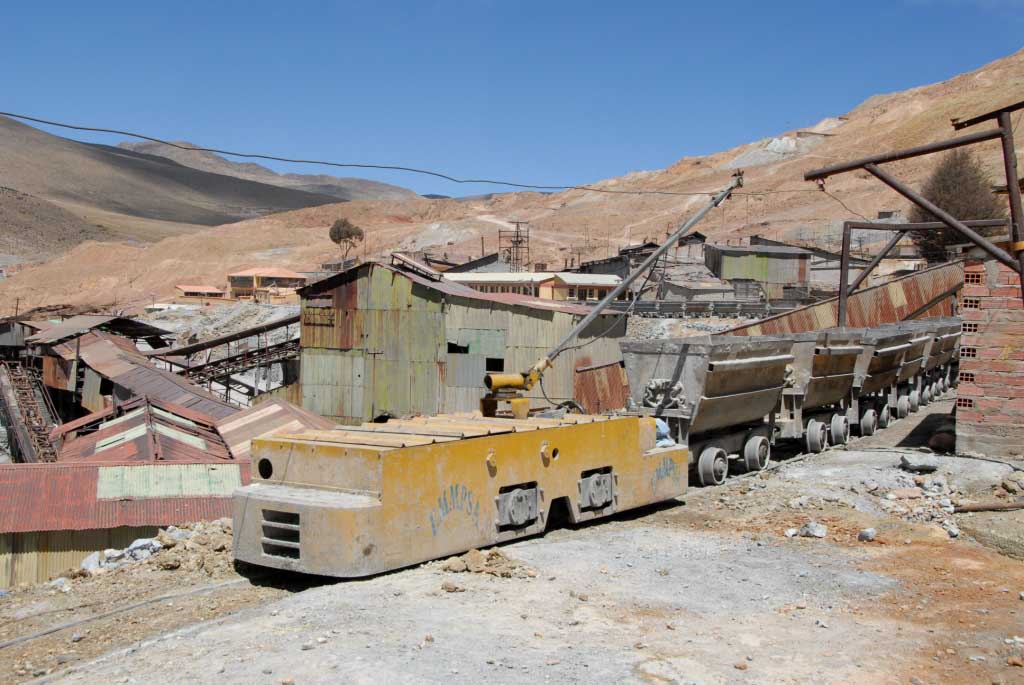 Photograph courtesy John Middleton.
A view of the Potosi Pailaviri mine with a Goodman electric locomotive hauling some mine cars, October 2009.

The line between Antofagasta and Oruro was completed in stages between 1873 and 1892, the Huanchaca Mining Company being the original owners. In 1888 they sold the line to new owners but continued to work the line until 1904.

By 1926 the mileage operated by the Antofagasta & Bolivia Railway was 1,671 miles, comprised of the following:

From July 1919 the Antofagasta & Bolivia Railway also operated the 441 miles of the Chilean Northern Longitudinal Railway between Pueblo Hundido, Baquedano and Pintados.

When built the gauge between Antofagasta and Uyuni was 2ft 6in, from Uyuni it was metre gauge. Generally the main line featured a minimum grade on the line of 3%, with mimimum curves of 120m radius, with the exception of the descent into La Paz which featured curves up to 15 degrees. Generally the main line was laid with 75lb & 65lb rails on wooden sleepers, but in the 1920s on the Bolivia sections steel sleepers were to replace wooden sleepers. On the branches 50lb, 60lb & 65lb rail was used, some of the Bolivian branches utilising steel sleepers.

The above information is taken from a 1926 Railway Gazette article, some of the station elevations have since been changed.

Resources:
With thanks to John Middleton for much of the tabular information and many of the views at El Tejar & Potosi.